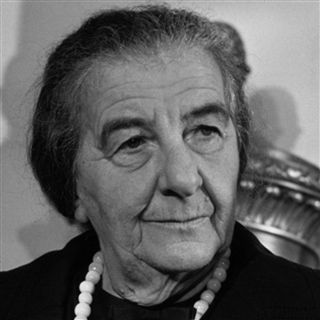 Born in Russia as Golda Mabovitz, Golda Meir’s childhood was marked by cold, hunger, poverty that claimed the lives of five siblings, and the memory of her father boarding the family’s front door in response to threats from imminent pogroms. But from such adverse, anti-Semitic circumstances grew one of the greatest of all modern Jews.
In 1906, Golda's family immigrated to the United States, and very quickly the young Golda distinguished herself as a leader – particularly in regard to Zionism. Just out of her teens, she moved to Palestine so that she could work first-hand to help build the Jewish state. Yet the very day after she signed Israel’s Declaration of Independence, when the fledgling state was attacked by five countries, Golda’s “work” took her back overseas; she was issued the country’s first passport and returned to the United States to raise much needed funds.
A woman of remarkable strength, who as Prime Minister of Israel presided over the country during the masterful rescue of hostages at Entebee and the miraculous turn-around during the Yom Kippur war, Meir’s legacy is one of complete commitment to the Jewish people. Members of Golda’s Circle share that passion. And though the challenges we face today may be different from those posed in Golda’s generation, they nevertheless remain.  Thus, just like the girl from Milwaukee, members of Golda’s circle provide generous financial assistance that helps ensure the continued growth and vitality of our community.
Members in this society are recognized publicly and permanently with a plaque mounted on the Golda's Circle Wall in the Freedman/Kaplan Commons in addition to being acknowledged through other benefits. Golda's Circle membership requires a $50,000 gift, payable over four years (minimum $12,500 per year).